Cheryl
I am usually typing on a computer most of the day, but today I am trying my hand at a new project: My 2011 365-Day Photo Journey. I gained a love for photography when I was required to take a fine arts class for college--I chose photography. The course required a lot of work--Professor Loehr saw to that--but it opened my eyes to a new world. It's been many years since I took that class and I don't know how much I actually remember, but following Laura Delagal's 365 Photo Journey and watching my niece's love for taking pictures has peeked my interested in photography again. Although I don't have a professional camera, I did receive a really nice Sony digital (point-and-shoot) camera from my sweetie for Christmas this year. Going through some difficult times in my life, I thought that undertaking my own 365-day photo journey might be a way to relieve a little stress and have some fun with my new toy. Through this journey I will capture some of life's joy and its pain, but I will also be able to refocus the lens of my life on the many wonderful things that God has created. Well, here goes. Wish me luck!

﻿﻿﻿
﻿﻿﻿ I was not overly thrilled with any of the photos that I took today, with the expection of two or three shots of the camellias on campus.  In the month of February we see mostly gray, overcast skies.  The sun came out for brief moments, but I was inside trying to work, even though this cold still has its grasp on me  (cough, cough, sniff, sniff, cough).

Early this morning one of my co-workers who follows my blog asked me had I taken my POD.  I told her that I hadn't.  She told me that one of the fountains on campus was full of soap soads and couldn't believe that I had not been out taking pictures of the funny sight.  First off, I didn't know anything about it.  Secondly, I couldn't leave the office at that moment.  However, I made sure to take the long way around by that fountain on my way to the cafeteria for lunch (fried chicken-thankfully, I still have my taste buds).  By the time I made it to the fountain the water had been turned off and most of the suds had already dissipated.  I still took quite a few shots of it, but I was able to capture only one shot where the wind gust caught up a handful of suds causing them to fly up into the air.  Since this was one of those "today" moments, I decided to post this pic (I wasn't that sold on any of the other photos either--they could have all been B&W with such a colorless day outside). 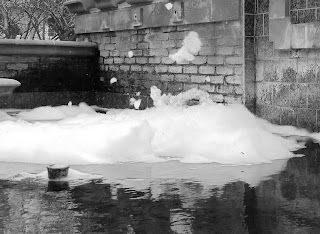